Gene Quintana, a native of Sacramento, California, has been a collector of Native American Indian baskets since 1980. He lives with his family in a suburb of Sacramento, Carmichael. Gene and his family enjoyed many years at their home at Lake Tahoe. He developed a relationship with the North Lake Tahoe Historical Society and his wife, Julie, served as a Board Member for several years. Gene had an early appreciation for art and was able to enjoy collecting Chinese works of art as a hobby while he was building automotive parts distributorship in 1963. He later found that he had acquired a real interest and love of Native American Indian Art, especially basketry. 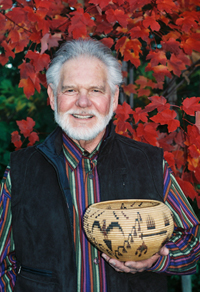 After selling his automotive business in 1993, one of the three largest automotive parts distributors in the United States, he felt fortunate to then be able to devote more time to collecting, buying and selling Native American Indian Baskets. Gene has an extensive collection of antique Native American Indian baskets, especially those originating from California and Nevada, Native American Indian Tribes. He also has assisted with basket appraisals, valuations and cataloging. He soon became nicknamed the "Basket Man" and presently advertises "Baskets for Sale" and "Baskets Wanted".

Mr. Quintana has participated, donated and displayed several major and important collections. He has contributed to the following: